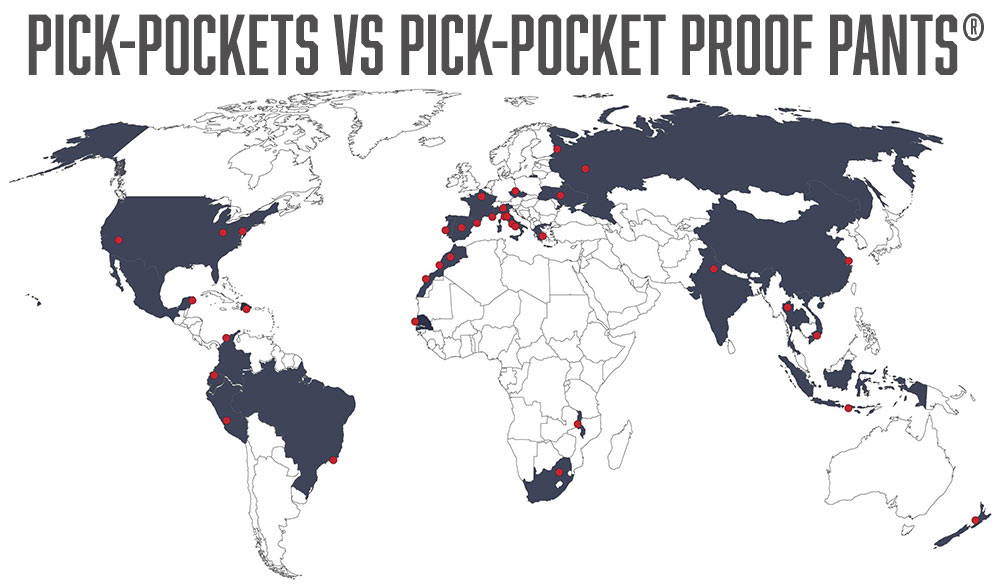 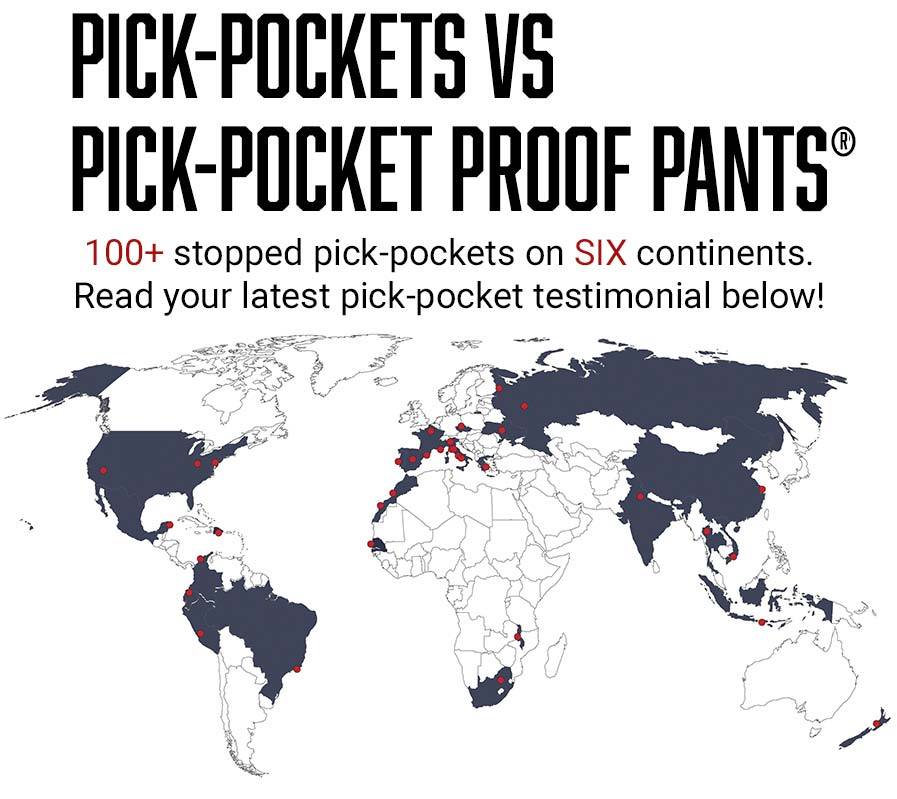 When I first ordered my P^3 Adventure pants for a trip to Italy in late May, I wondered if I was being a bit paranoid for spending $100+ for a pair of Pickpocket Proof pants. One ride on the Rome subway system (Metro) alleviated any concern I might have had. Your pant possibly saved my passport and a "fake" wallet I hid in my left hip pocket.

After a seven-day cruise along the Amalfi Coast, we were returned to the Rome airport and decided to use Rome's highly touted rail and metro system to travel to our bed and breakfast.

The rail trip to Rome's main termini was uneventful and when we reached our subway platform there were only a few other people waiting for the train.

Then, just as the train arrived, a swarm of hundreds of people pushed onto the platform standing 10-15 feet along the track. When the doors opened the mob surged toward the train carrying my wife and me along with it. We were pushed on board the car And I was jammed against a stand post so tightly I could barely breathe.

It was a perfect situation for pickpockets and I was alert. The train departed the station and within seconds I felt fingers fumbling with the left flap button on my left hip pocket. I was holding onto the stand post with my left arm fully extended and a 35-pound camera pack on my back had me wedged against people so that I could not turn to pull away from the thief. I could only turn my head to look and faced tree people close enough to reach my pocket...one a dark-skinned fairly nicely dressed woman with shoulder length ugly straight red hair; the second, a shorter, expressionless Italian man who was looking past me and the third, a pleasant black-haired woman who appeared to be with three nuns who had managed to get seats.

The fumbling stopped when I looked but resumed instantly when I turned away. My right arm was pinned against my body and I was holding onto the stand post with my left arm. The only thing I could do was let go...so that's what I did. Just as I did, the train lurched. I thought the crowd would hold me up, but somehow I went down. Then, because of the backpack and crowd pressure, I had a hard time getting up until I was helped up by the expressionless Italian behind me. His expression never changed. Once up, I thanked him then spotted the red haired woman in front of me, standing between me and my wife who was holding onto the other side of the stand post.

I checked my rear pocket and the left side of the flap was unbuttoned but the zipper was closed. I caught the eye of my wife and said, "pickpocket"; fairly loudly. When I did the woman with red hair whirled her head around and gave me a killer look of hatred...probably because she had been foiled by my P/3 pants.

I realize this story is way too long for a testimonial but I wanted you to know about it and to thank you for producing these pants. I really didn't expect to need them but I think they did their job. Had she gotten into my pocket, all she would have gotten was an old throw-away wallet with some expired membership cards that look like credit cards. Still, beneath that was my passport. But she never came close to any of those items.

Finally, I want to say that when I first received my pants, I immediately was impressed by the quality and softness of the fabric. I think it was the softness that allowed me to feel the fumbling with the button when the incident started. These pants are worth the cost for both the quality and the peace of mind they provide. Thank you for making them available. Thanks, Adam for the help on these pants, to get the right fit!

At first my husband complained about all the buttons but then...

We were in Rome when the pickpockets hit on the tube. One friend lost his new iPhone. My husband's phone was safe in the cargo pocket. They got one button open, but were thwarted by the other button and snap! Yeah!

Thanks again - worth every penny and they look great. Taken from a review left for our Adventure Traveler Pants:

"All in all I think these are a fantastic addition to any backpack. I would ideally (and intend to) always travel with them as they are both practical and stylish for all forms of travel - even when security is not as big a concern as it was form me. Incidentally I got mugged at knife-point in one major South American city and having the equivalent of $300US in my passport pocket was extremely comforting. The thief only got the $20US in my normal pockets - result!

In the future, it would be great to see a lightweight hike version of these pants with better wicking waterials that maintain the current security and unique characteristics. But as it stands the PCubed Adventure Traveller Pants are an invaluable kit addition for any intrepid traveller. Highly recommended." Since I had the zipper closed and the flap over it, they couldn't' get it. As they were trying to get into my pockets, other people on the train noticed that something was happening. A local Italian man yelled and one of the ladies from my tour group also noticed what was going on. This happened right as we were pulling into a station right after the people yelled. The doors opened and the three children ran right out of the train like they were shot out of a cannon!

You know there's no way there were getting in my pants!

Feeling Protected On My Trip To Europe I got my P^Cubed pants the night before I left for two months in Europe including a two week cruise in the Mediterranean.

The best news is that I didn't get pick pocketed anywhere as did several of my fellow cruise mates, mostly in Naples.

While one must be always vigilant in crowds, I was able to enjoy the sights and stroll the streets without constantly being worried about losing important documents and money. That alone makes these pants worth the cost.

PS: Only the Street Sweeper in Plaza del Ángel in Madrid has more pickpocket proof pants!