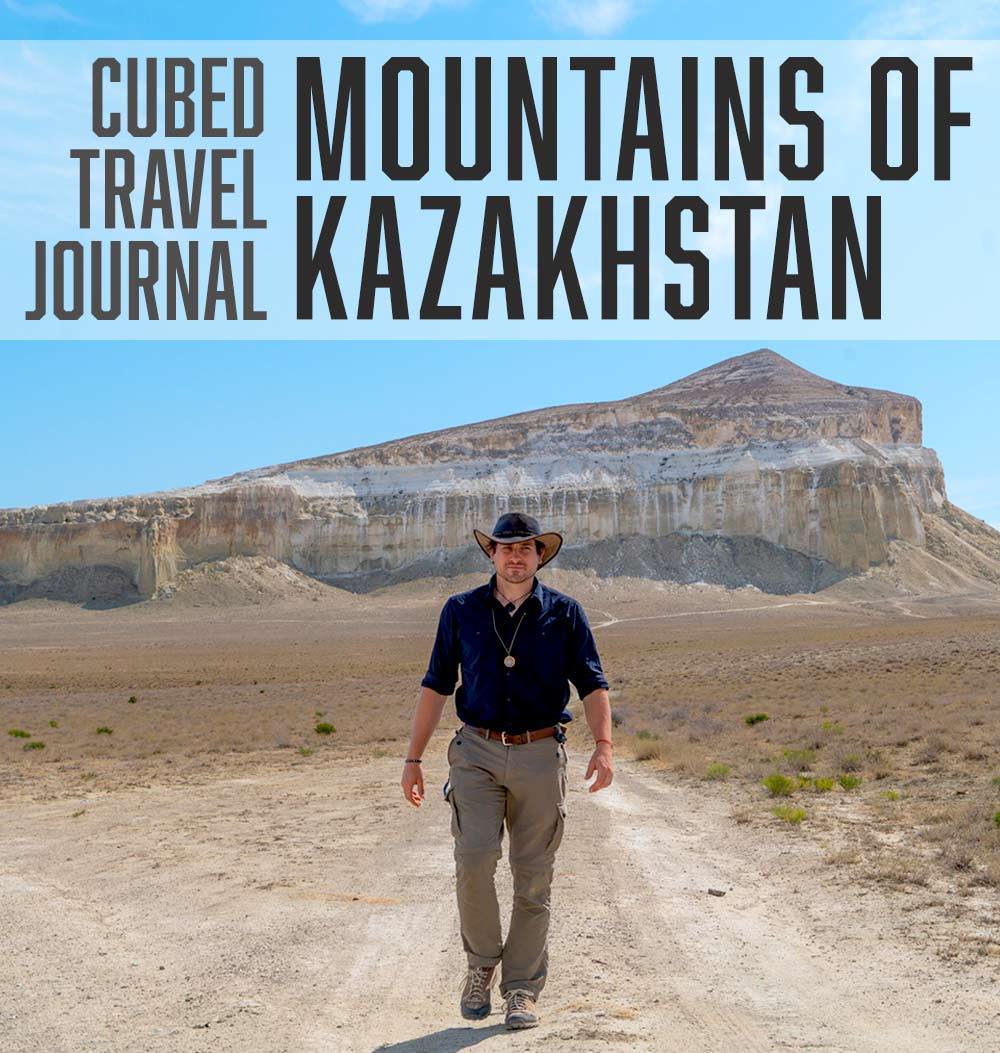 With a name that translates to “Land of Wanderers,” this is one of the last places on earth where you can truly feel like an explorer. Welcome to Kazakhstan! The 9th largest country on earth that boasts a total population less than the city of Istanbul. From majestic limestone cliffs to mysterious car-sized stone spheres, to mosques carved right into the mountainside, Kazakhstan’s geology and intriguing culture will inspire anyone with the love of travel to add it to their wish list. 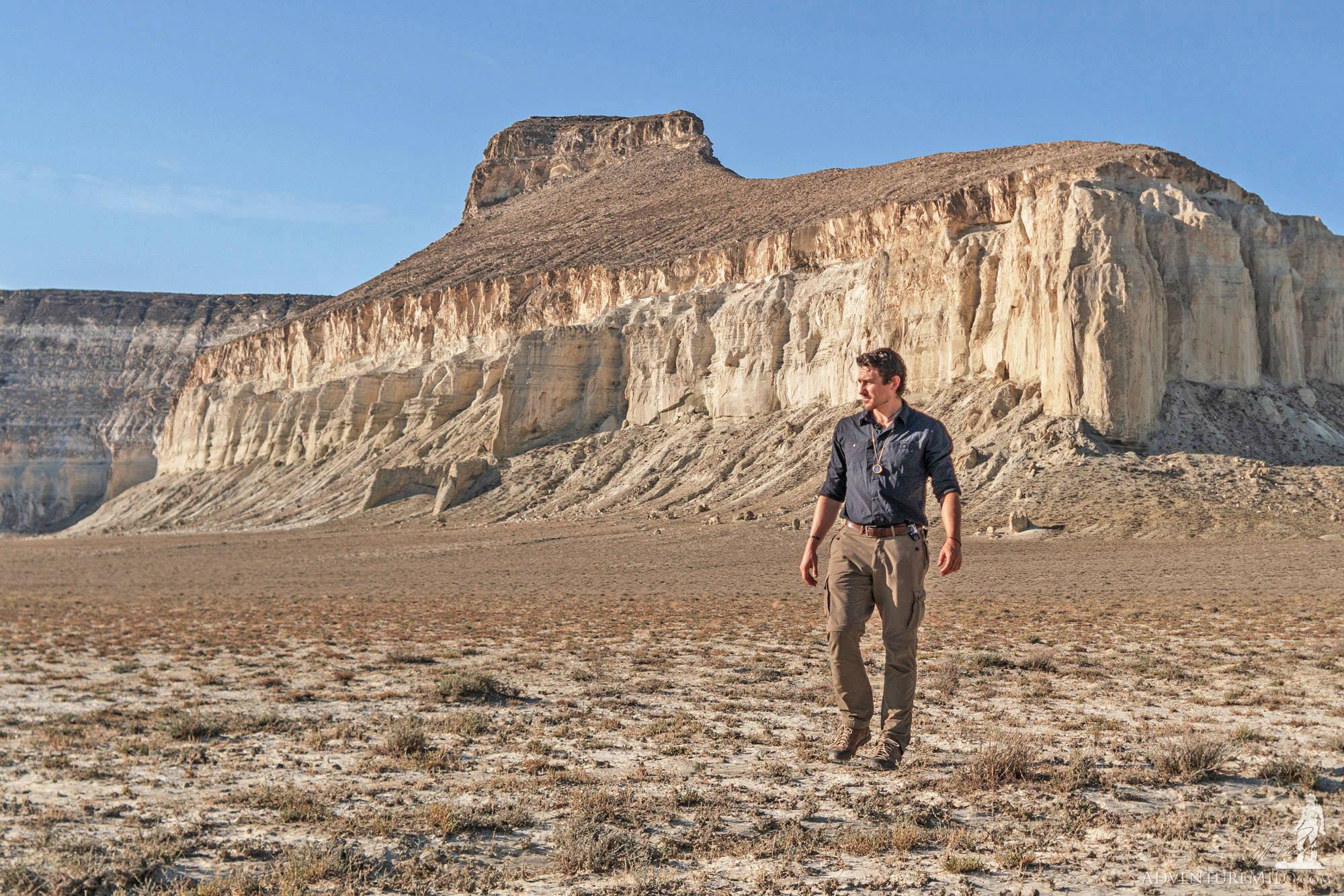 A combination of the world’s largest dry steppe region, deserts, and mountains – all historically the hardest places for humans to settle down​, Kazakhstan was a mystery to me before landing in the country.​​ The famous Silk Road is what put the region on the map, literally. As a result, it became a strategic territory to control and inspired innovation in travel​ over many generations​. ​Historians believe humans first domesticated horses​ here​, though the vehicle of choice is none other than camels. In fact, the culture continues to deeply worship the “Ship of the Desert,” and you are bound to find some no matter where you go. 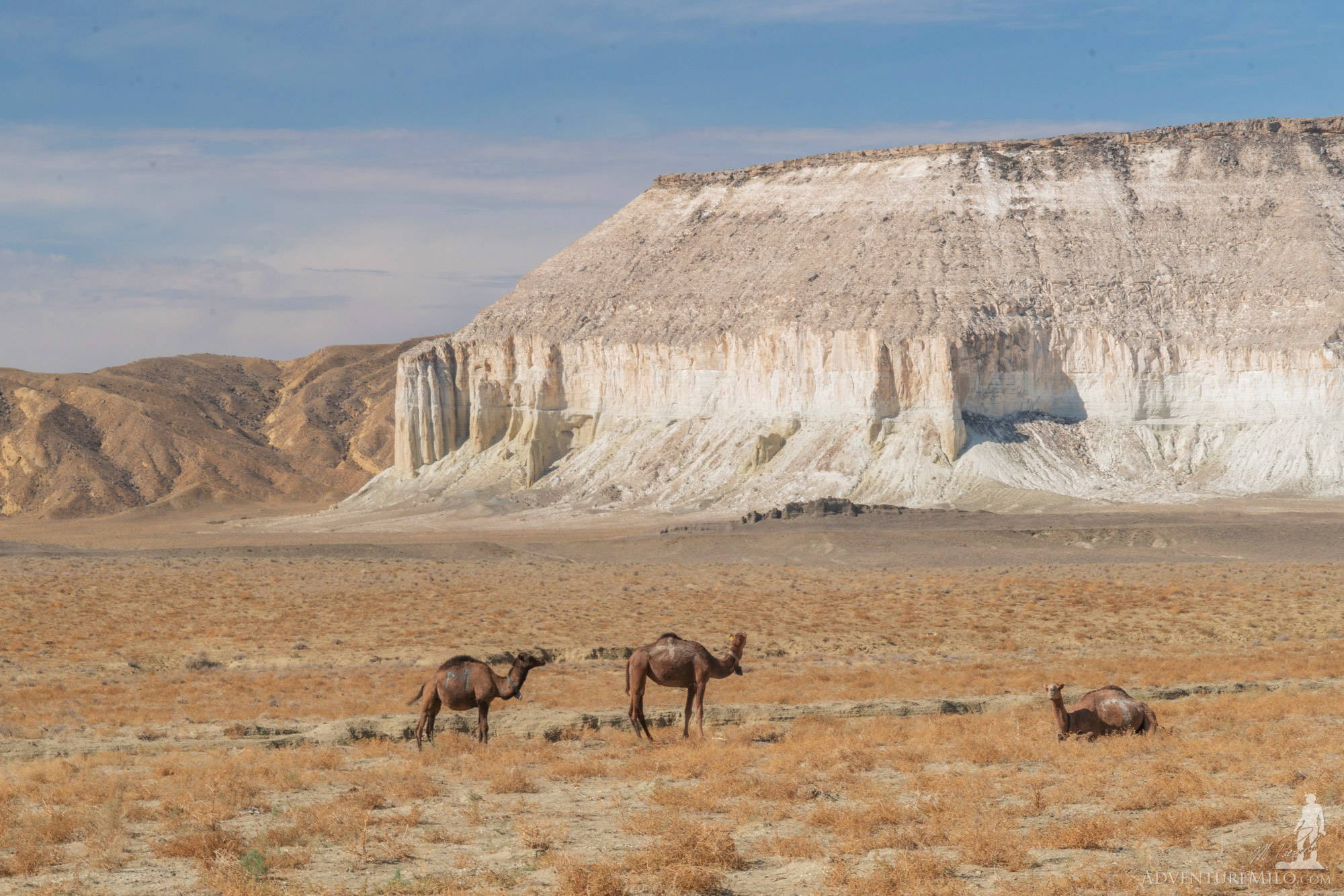 As we leave the city, it's impossible to miss the ​impressive sculpted mountains coming into view. Eons of geologic time mark millions of layers that tell the ​earth's story; their sides carved as if by a Renaissance sculptor. From a distance,​ the cliffs appear to sail across on seas of sand, but the closer you get the more interesting they become. It was in these mountains that early tribes would seek shelter and discover resources. One particularly famous mountain is the site where a great Kazakh leader was trapped by invading forces, the Ustyurt Plateau. It was in the caves ​here, which you can explore, that it is said he discovered a freshwater spring and survived. The mountain is so famous, it now appears on the 1,000 Tenge note. 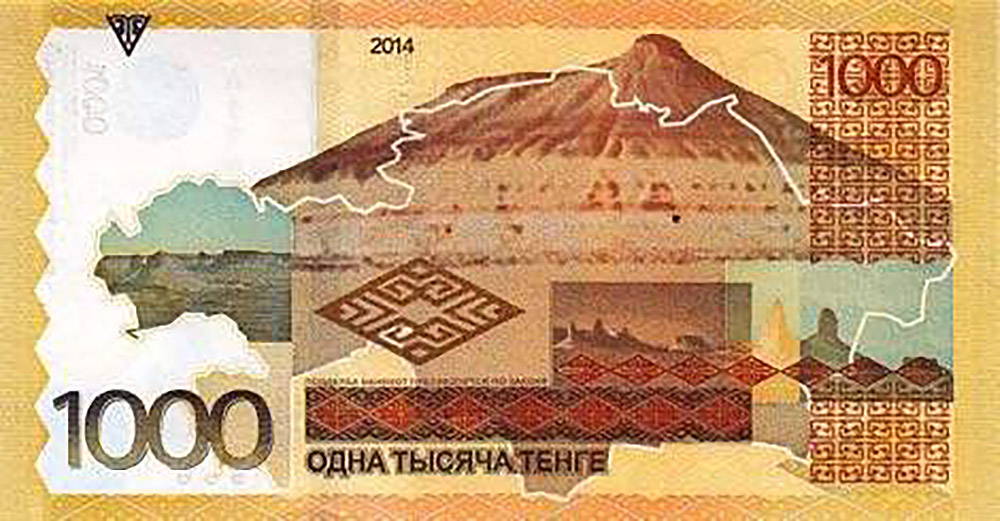 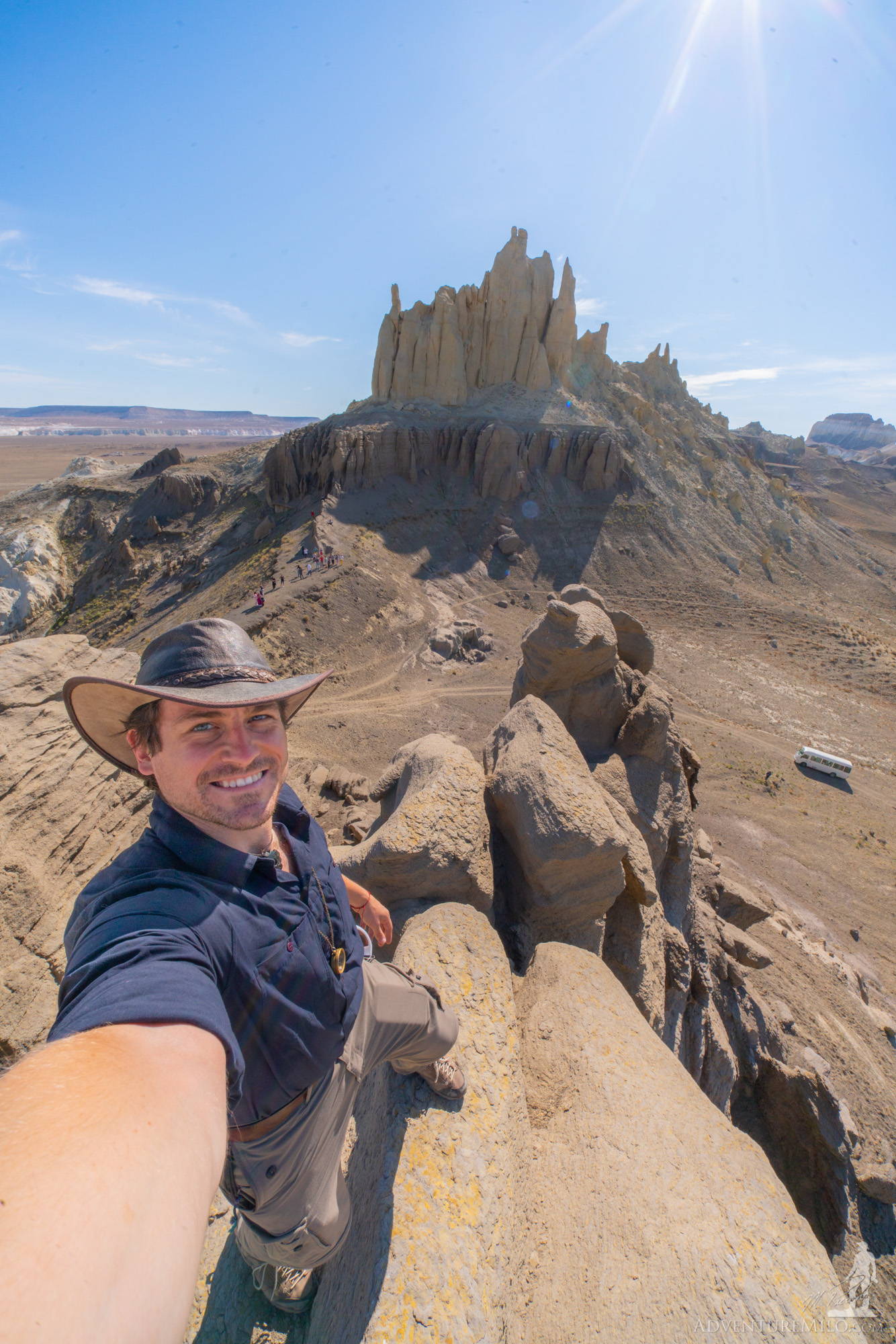 ​Kazakhstan barely gets any rain and mostly bakes in the unforgiving sun. Pair this with the fact that the entire region was under a massive ocean at one point, and you may start to understand the incredible natural beauty of the country. Also what made some of the oddities you can find here. Take the Torysh Valley, for example, otherwise known as the “Valley of the Balls.” As you drive along a vast sandy plain, an odd large stone begins to surface every once in a while. Soon, you notice that these dark stones compose a line that cuts the desert in half as if deposited deliberately… but, they’re not just stones. These are large balls; near-perfect spheres of hardened rock, evenly wrapped in layers that flake off like cracked eggshells. Though theories exist on how these formed (or who they were formed by), it is still largely a mystery and you are encouraged to come up with your own explanations. 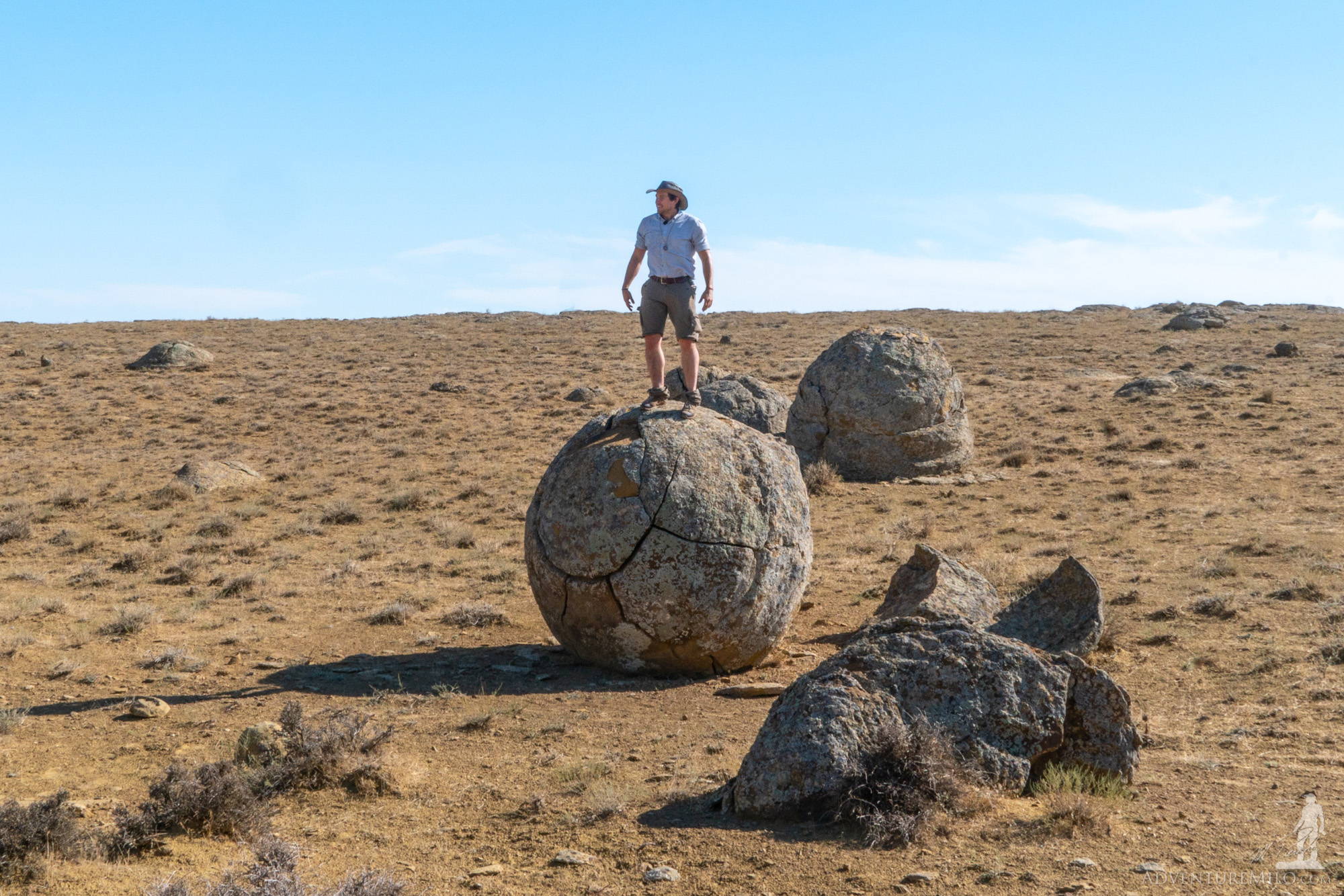 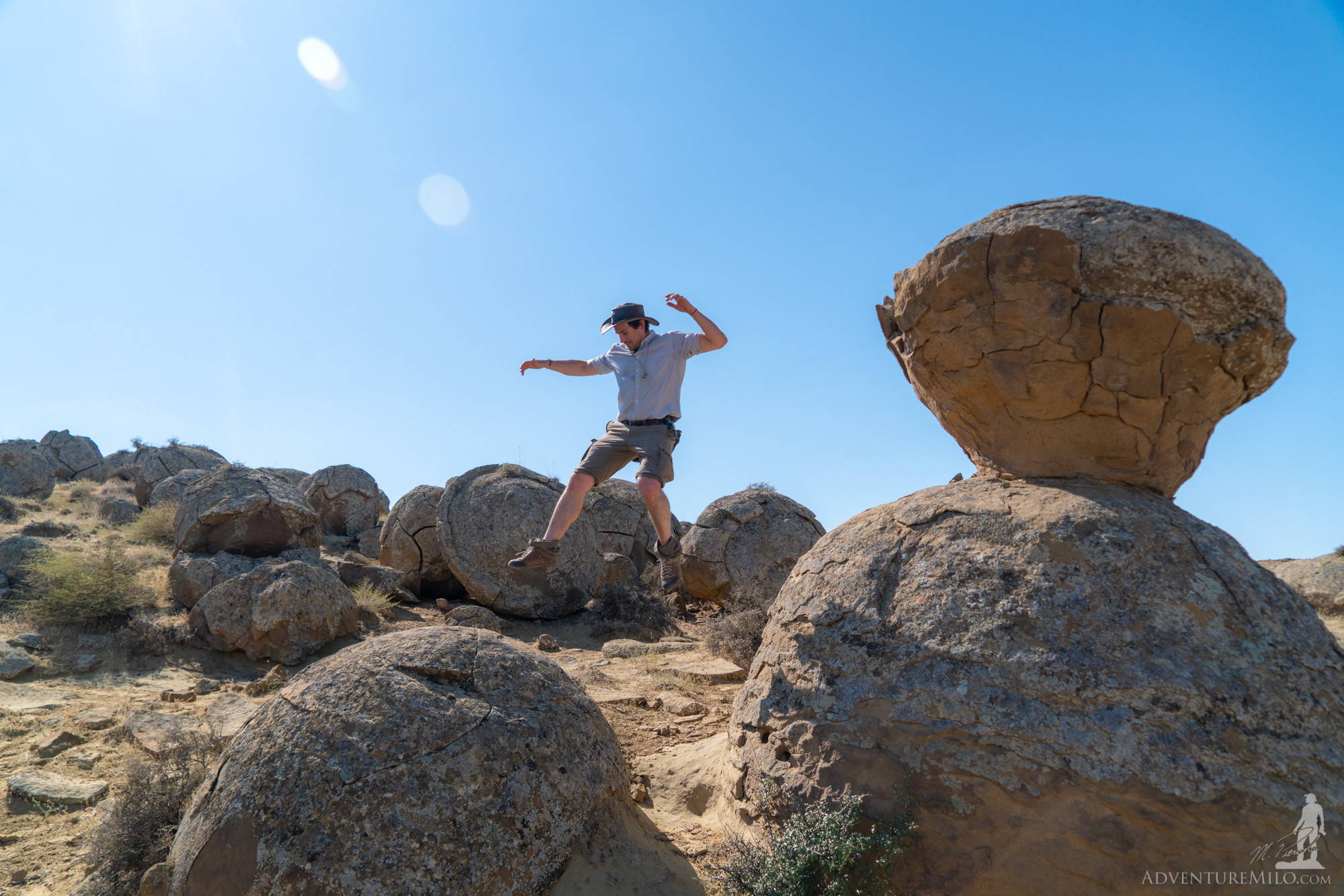 ​As we climb back into our 4 wheel drive vehicles, we make our way across the steppe to a set of cliffs the ancient Kazakhs used for more than a refuge for the elements, they also used it for worship. Kazakhstan is one of the few places on earth where entire mosques were carved into the raw stone. The Shakpak Ata mosque, for example, is entirely underground at a site with a unique limestone features. Before you even go in, the walls on the outside appear to be alive, resembling an organic network of seemingly breathing openings. These features are integrated into the mosque, serving as decorative walls that encase tombs, rooms, and prayer sites. Inside is equally impressive with multiple rooms, a roof opening for a fire, and beautiful writing carved into the walls. The mosque has carpets that remain on the site for any visiting worshipers who need to spend the night, and a tradition of removing your shoes upon entry. 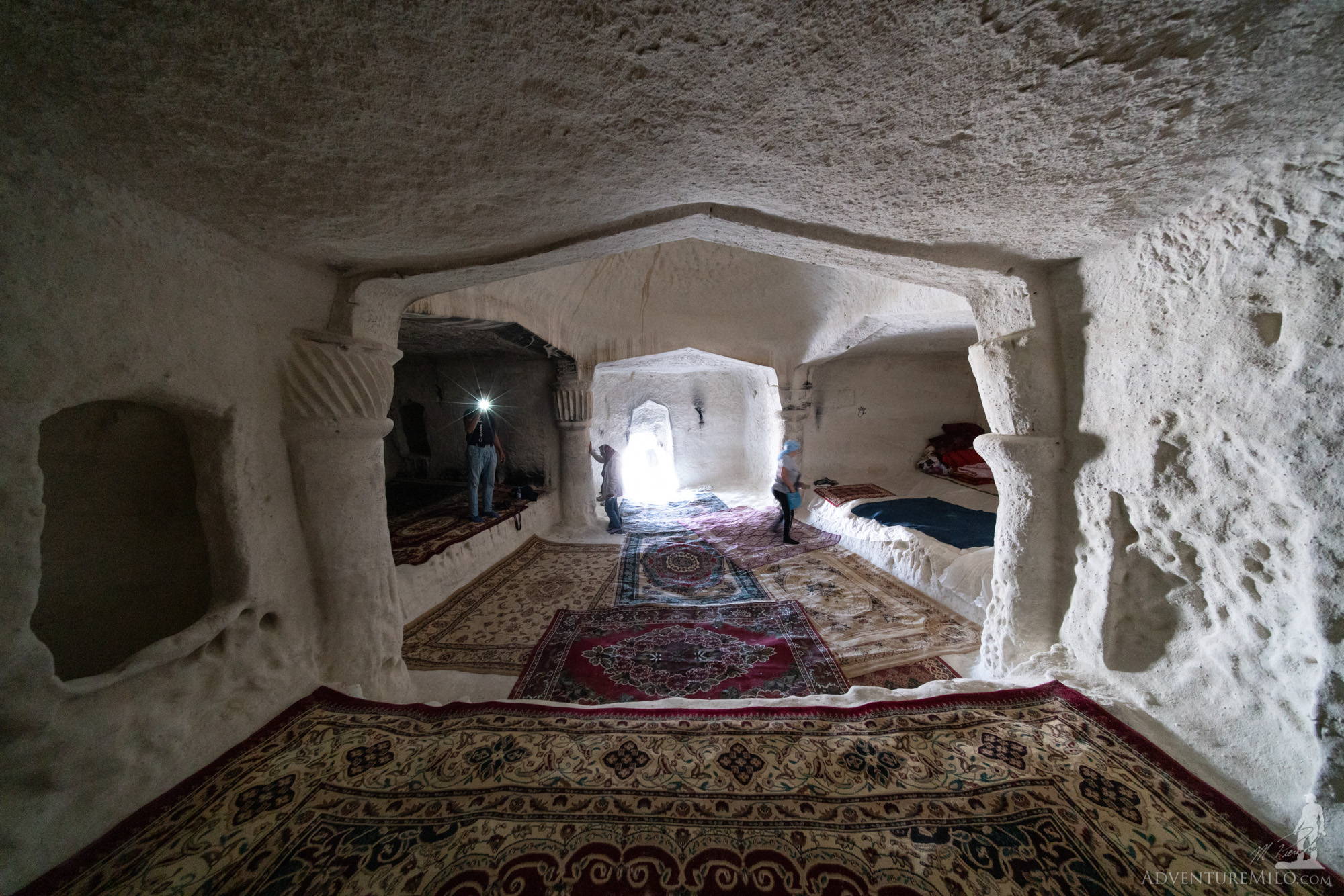 But don’t worry! That’s not where you’ll be staying, traditional housing as you travel is yurts! Large circular tents constructed with a complex wooden frame, ropes, canvas, and rugs, are s​e​mi-permanent features of the landscape. These structures have a rich history as their construction is tied to Kazakh beliefs. The crowning piece of a yurt called a shanyrak and appears everywhere in Kazakhstan. Each part of a yurt has deep meaning for the Kazakh people as they maintain their traditions to this day. As night falls on the desert, the sun sets behind the cliffs, and the sky is blanketed by a sea of stars. 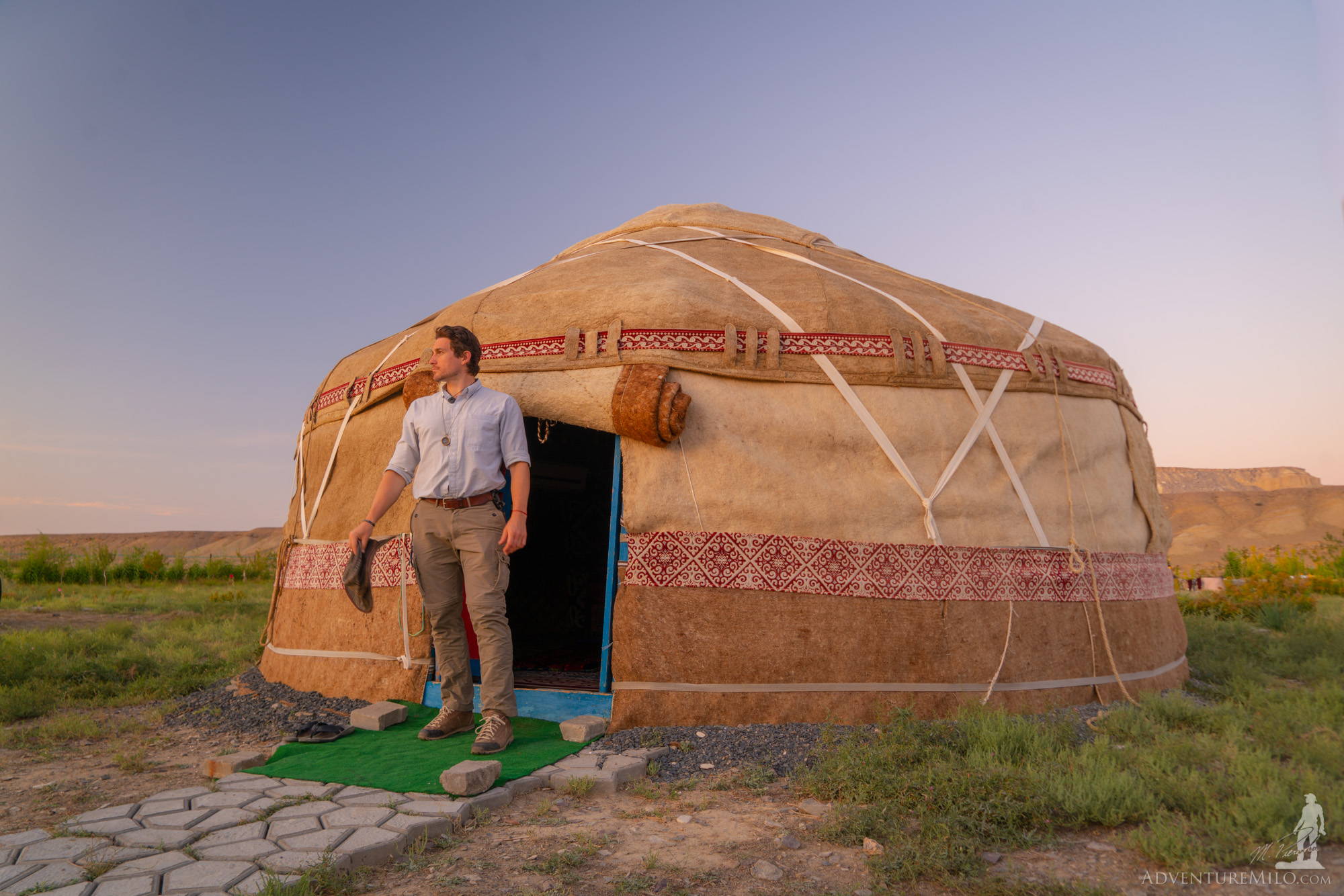 Kazakhs are known for their hospitality. It is a tradition to make sure travelers are offered the best fare when they visit, including entertainment. One more performance you may be lucky to see when you visit Kazakhstan involves falcons and horses. A sport that is very popular in Kazakhstan is bird hunting (not hunting birds, but hunting with birds). A trained falcon is kept blinded until the prey is spotted, at which point the blinders are removed and the falcon takes flight. It traps the prey until the hunter catches up, and is fed a tasty treat. 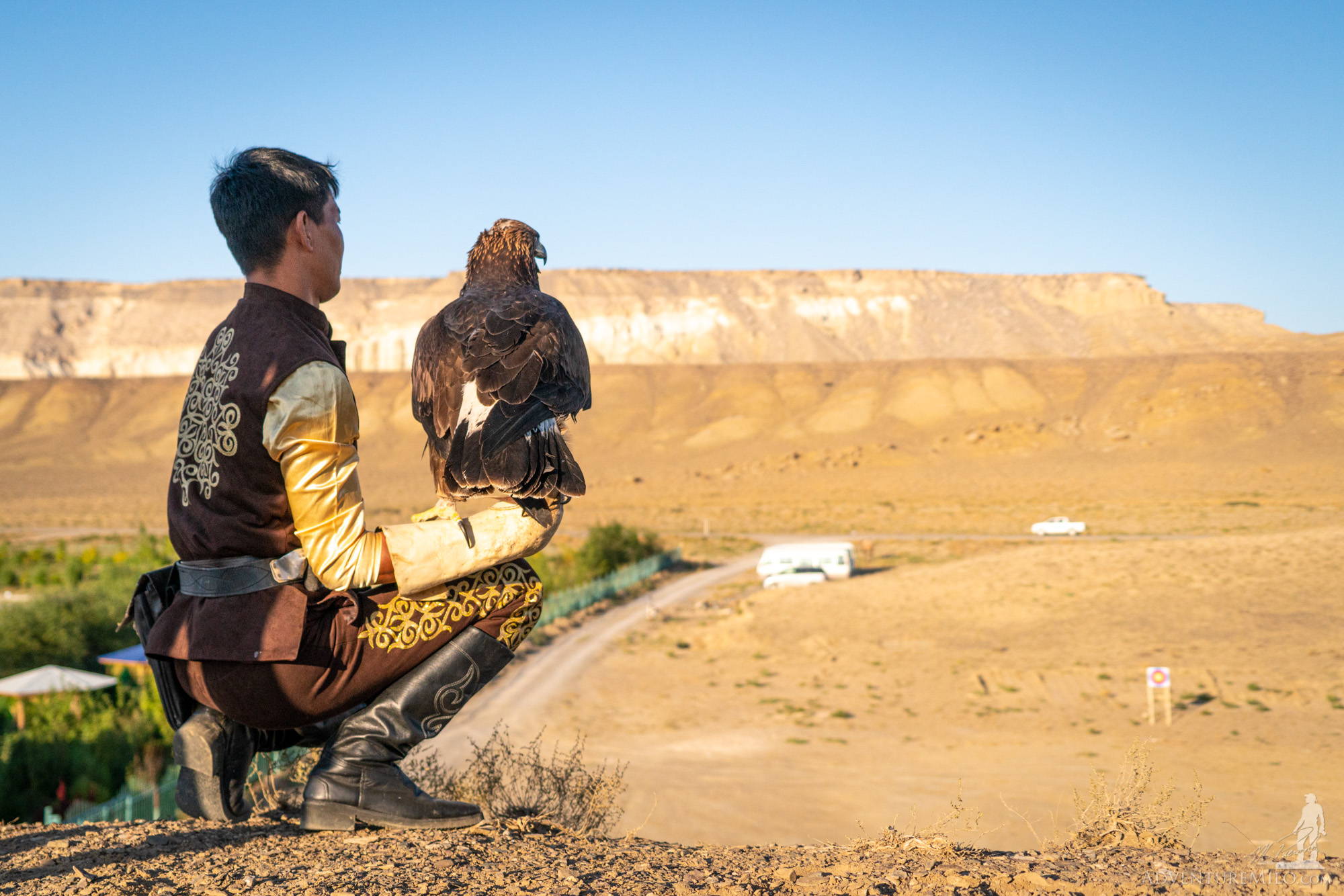 ​Now for the finale, a sport called Buzkashi, which is similar to a game of basketball; except instead of running the players ride horses, and instead of a ball the players use a “sheep.” This is a team game where players start at the edge of the playing field and race to pick up the sheep from the center. Traditionally, a sheep was used, but in recent times it has been replaced by a large leather bag with holds where the legs would be. Once a player has the sheep, he must take it to his circle and drop it in the center for the win. Sounds easy, but now imagine an entire team of players swarming you on horses trying to knock you down, rip away the sheep, and stomping up a mess of dust in the process. 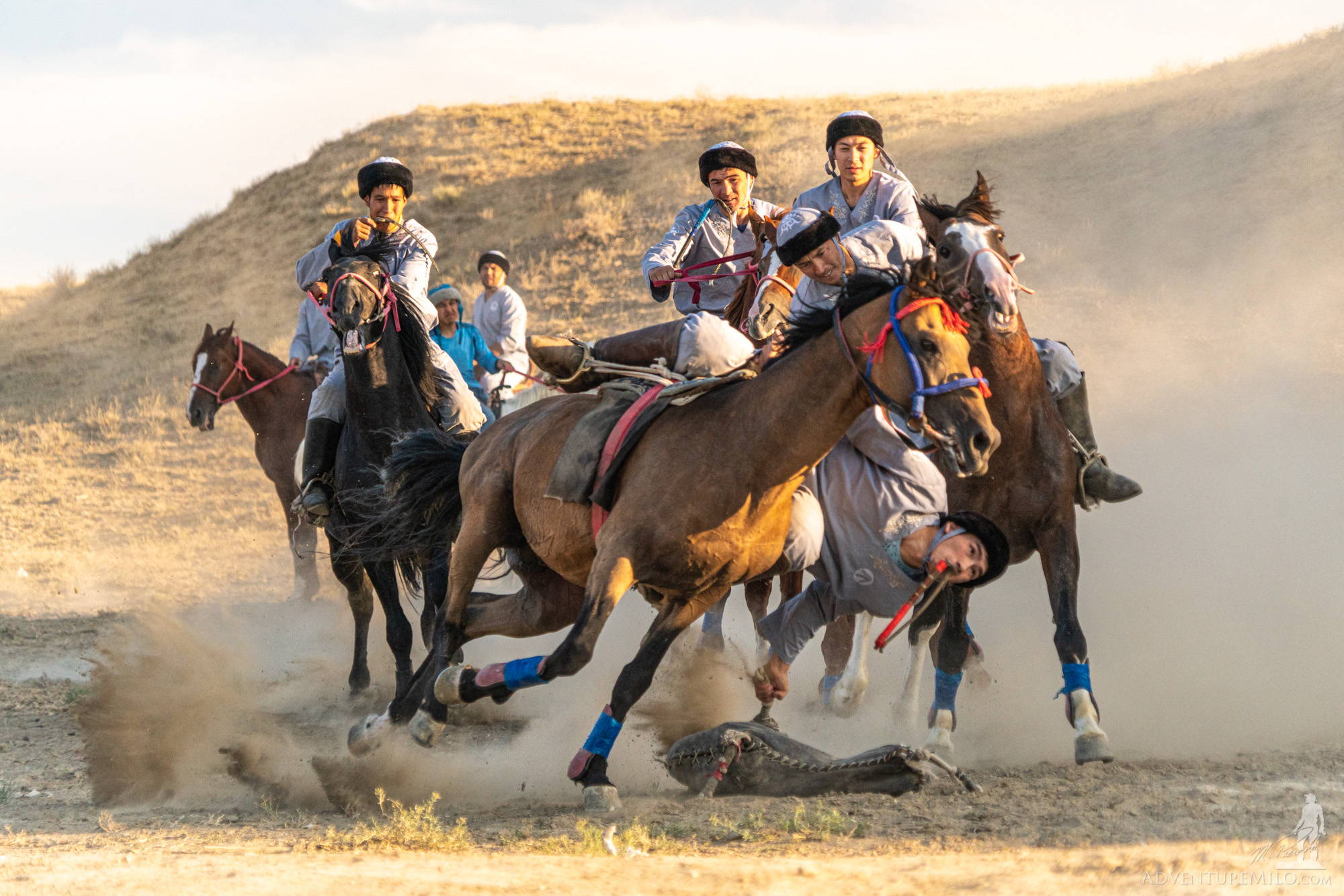 Back in the city, I'm grateful to have visited Kazakhstan. What the country lacks in population, it more than makes up for with its vast unspoiled beauty and treasures. Visiting for the first time feels like you're discovering it as you go from via off-road vehicles, to horses, to camping in yurts under a galaxy of stars! 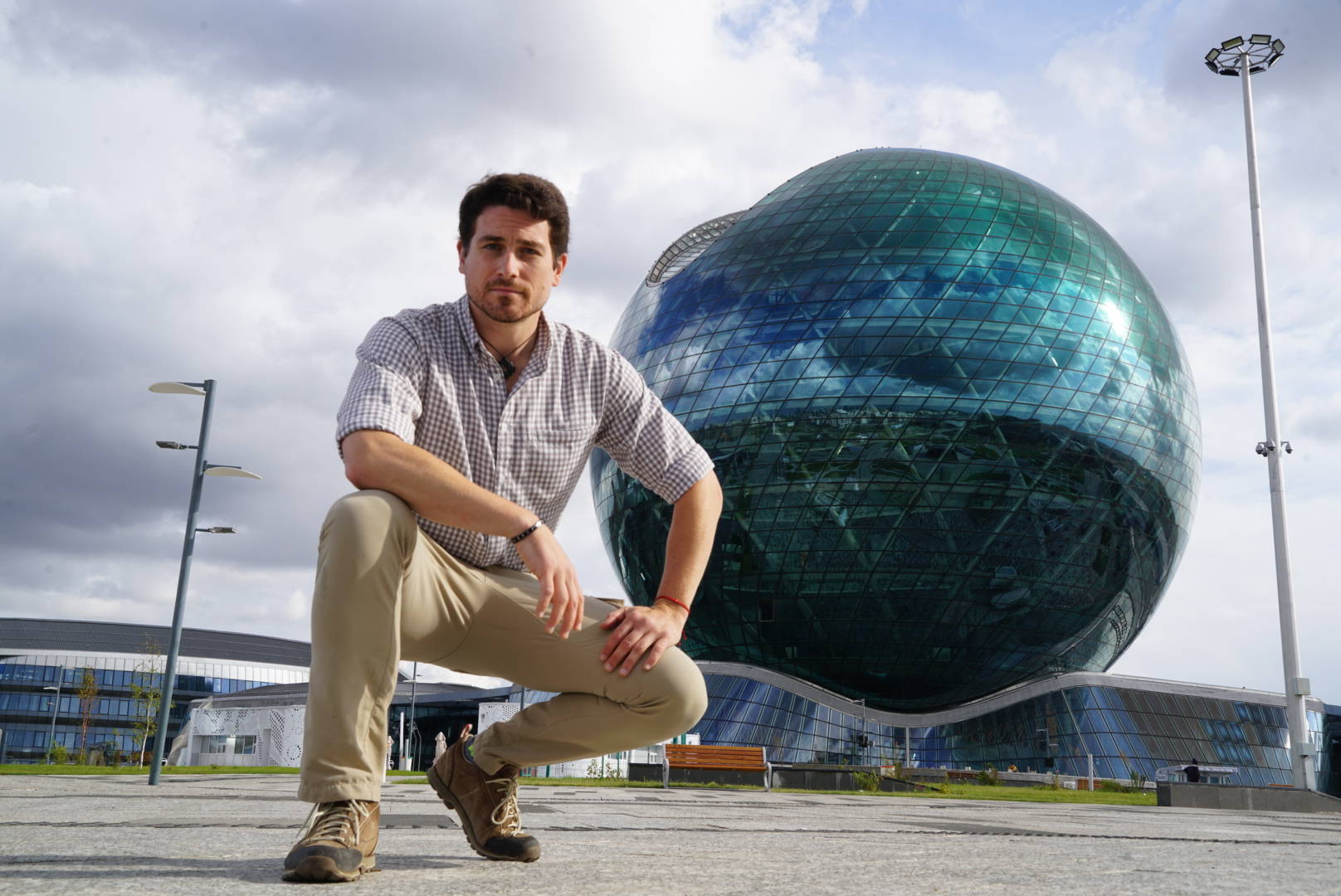