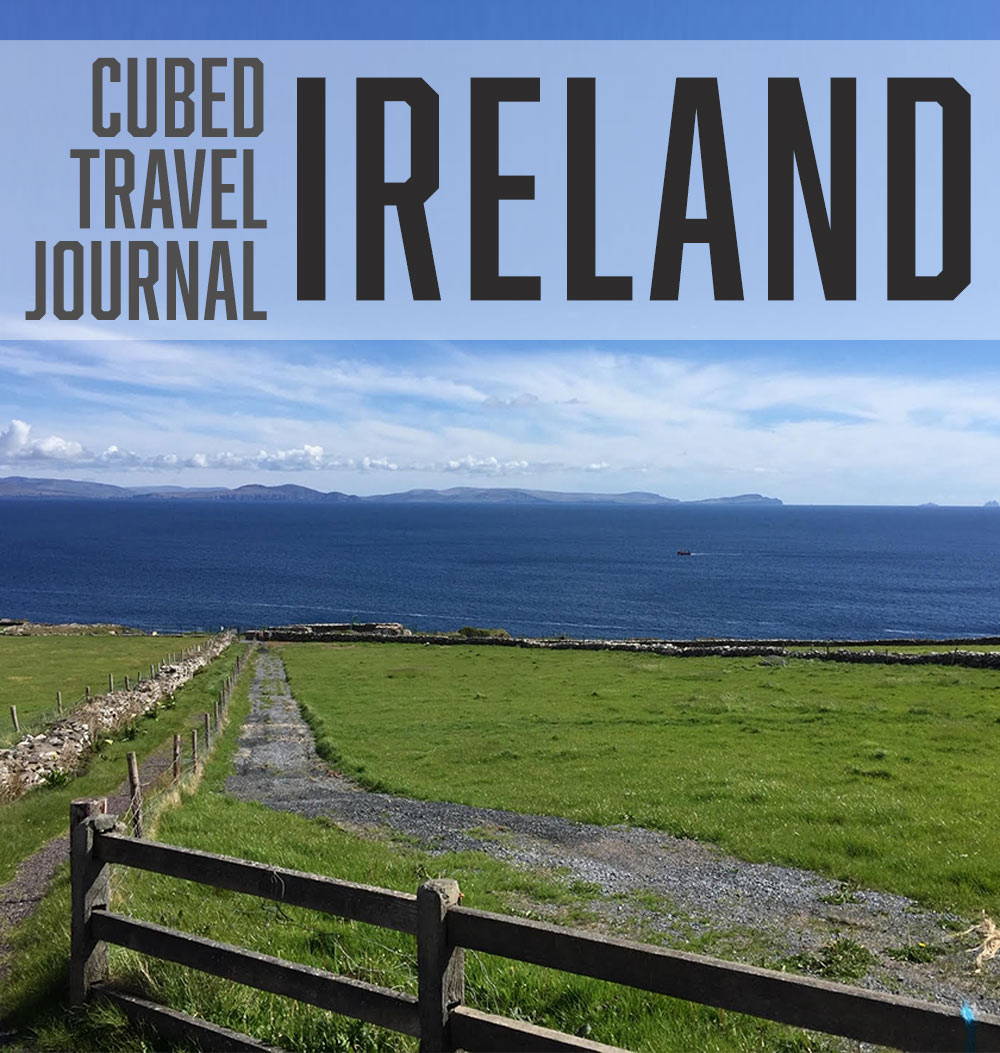 The eyes of several dozen strangers watched us. It was too late to retreat and back-out. We were committed. So on we went, tentatively pushing our way through the crowd - which instinctively parted before us. Miraculously, and thankfully, our sanctuary lay just a few steps ahead - a cozy empty booth and ubiquitous tiny round table not much larger than an oversized dinner plate. Now to get a pint from the bar!

Our days were spent circumnavigating the island clockwise from Dublin and arriving back again 10 days later driving our rented car (on the ‘wrong’ side of the road of course). You’ll have heard Ireland referred to as the “Emerald Isle”, but nothing prepares you for the green. Green in every variation, shade and tint. It is hard to imagine such an infinite variation in the hue as far as you can see and in every direction. 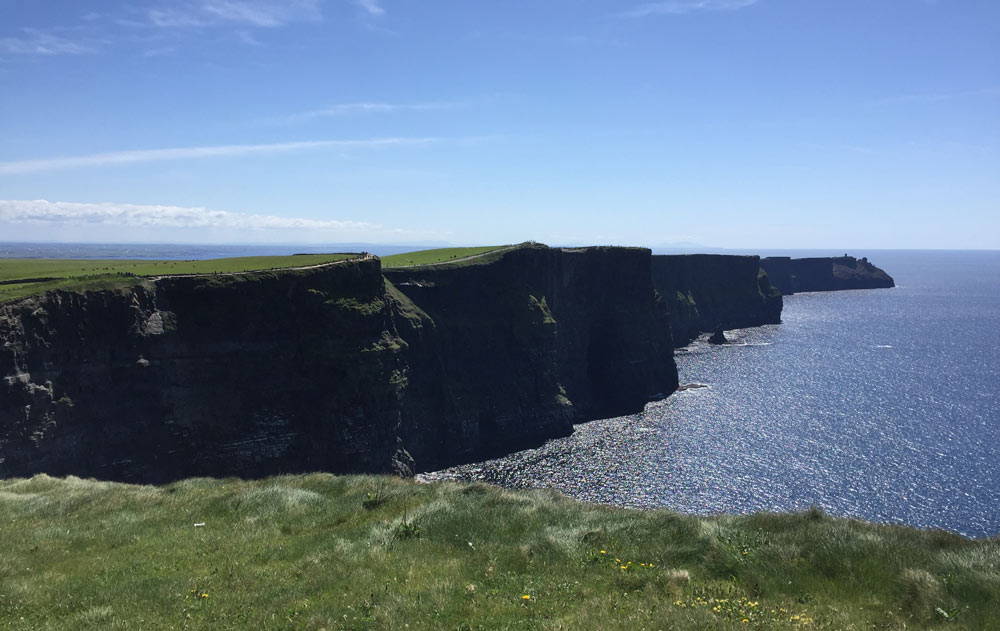 But those greens can blend together while rounding a hairpin turn at speed! 80 kilometers per hour (50mph) does not seem so fast at home. But when screaming along a one lane roadway with low stone walls forming the borders and overgrown greenery leaning in and whipping the side of the car, the posted speed limit seems absolutely crazy - but one gets used to scanning beyond the bends ahead for on-coming traffic, following the local courtesies for making way and passing. In our 10 days experiencing country, highway and city driving we saw no accidents at all. However we were both relieved to finally hand back our car, unscathed, at the Dublin airport.

Now back to the pub, it is Ireland... as it turned out we needn’t have worried. True, we had deliberately eschewed the noisier and more obviously tourist-catering establishments, so it was our own darn fault that we stumbled into a pub most decidedly “un-touristy”. What we didn’t count on was being the only non-locals in a fully packed “local” with an apparently critical game of football (soccer) playing on the several TV’s. A clearly partisan crowd of mostly twenty-something males displayed various stages of beer-fuelled enthusiasm.

Like everyone else we’d met in Ireland, the patrons of this bar were just there to have some fun, sing some songs and tell some tales. But for my wife and I (decidedly skewing the average age of pub patrons northward) that remained yet to be determined. Safely in our seats we needed yet, as unobtrusively as possible, to manage the drink-ordering process. As you may have noted from the many Netflix series set in the British Isles, one doesn’t wait to be served in such an establishment - you’d wait forever - one elbows their way to the bar and in a process discerned only by the bar-keep, your turn, in turn, comes to order. You pay upon being served (no running a tab) and you then very carefully edge discreetly back through the throng, mindful of not sloshing your beer on any of the other patrons jammed at the bar either ordering, standing and drinking, or performing the trifecta - standing, drinking and shouting at the TV.

Back in our seats and having toasted our success (“slainte” - “to your health”) we discreetly took in our surroundings. Like every other of the many Irish pubs we ‘d been in this one was well worn, cozy and comfortable. And due to the match on the TV, this one was very crowded. The “red shirts” were playing the “white shirts” in what was clearly an important match. We quickly deduced the red shirts were the “home” team and it wasn’t long before we were cheering along at the appropriate moments. The enthusiasm was contagious and soon the initial wary glances shot in our direction turned to nods of approval and then to smiles.

One other table held a four-some in our relative age bracket. Their curiosity about our presence was not subtle. Finally a tall slim gent peeled away from his friends and came over to ours, and without waiting for an invitation pulled up a chair to the already cramped space, set his glass on our tiny table and out poured the questions. He’d obviously been elected the emissary to get the goods on the tourists. Who were we, where were we from, what were we up to on our trip and on and on. We were to discover, and not to generalize, but that like just about everyone we met in Ireland this gent was inquisitive, talkative, full of the “blarney” and very tuned-in to current events and geography relating to North America. Needless to say it was only a matter of time before our new friend waved his friends over to our increasingly cramped space so he could show off his new friends to his old ones. And so it was that we passed another wonderful evening in Ireland. 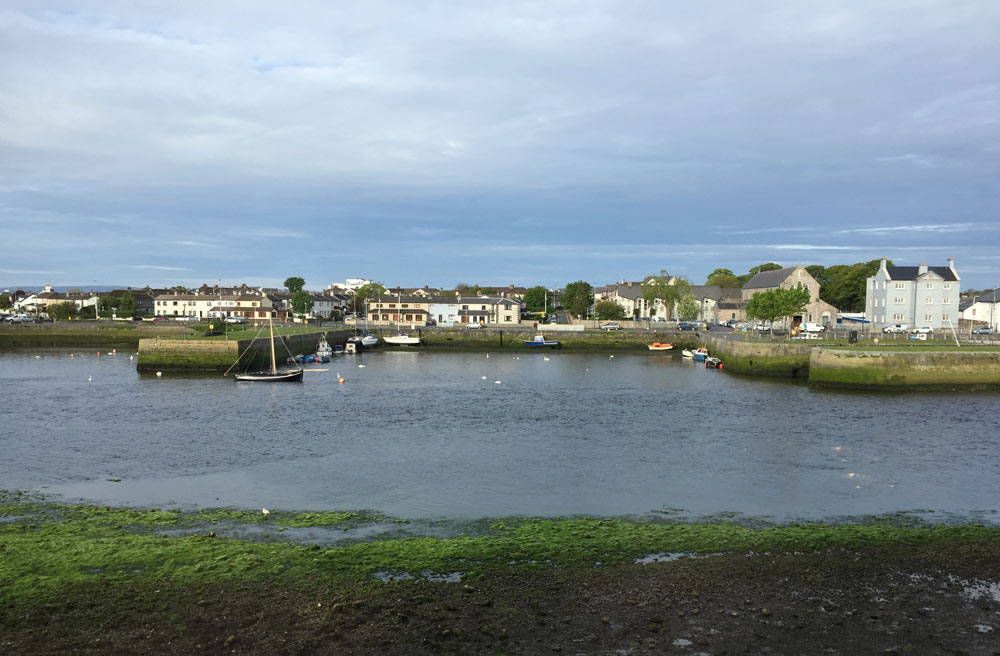 From prosperous and pretty towns like Kilkenny, to the idyllic fishing village of Dingle, past endless bucolic fields of sheep, to weaving along rugged and impossibly beautiful cliffside ocean inlets, and on to fantastical natural formations like the Giants Steps in the North, castles, museums and yes even gaols (penitentiaries), towns, villages to small cities, Ireland was everything we had hoped it would be. The food, from traditional fare like “boxties” (potato pancakes wrapped around a delicious creamed sauce with chicken) and the ubiquitous and consistently delicious fish and chips to finer fare like delicious lamb served at a highly rated restaurant in a 300 year old stone building seaside in Galway, to upscale dining at a classically imposing castle (now a hotel), one will not go hungry or thirsty in Ireland! 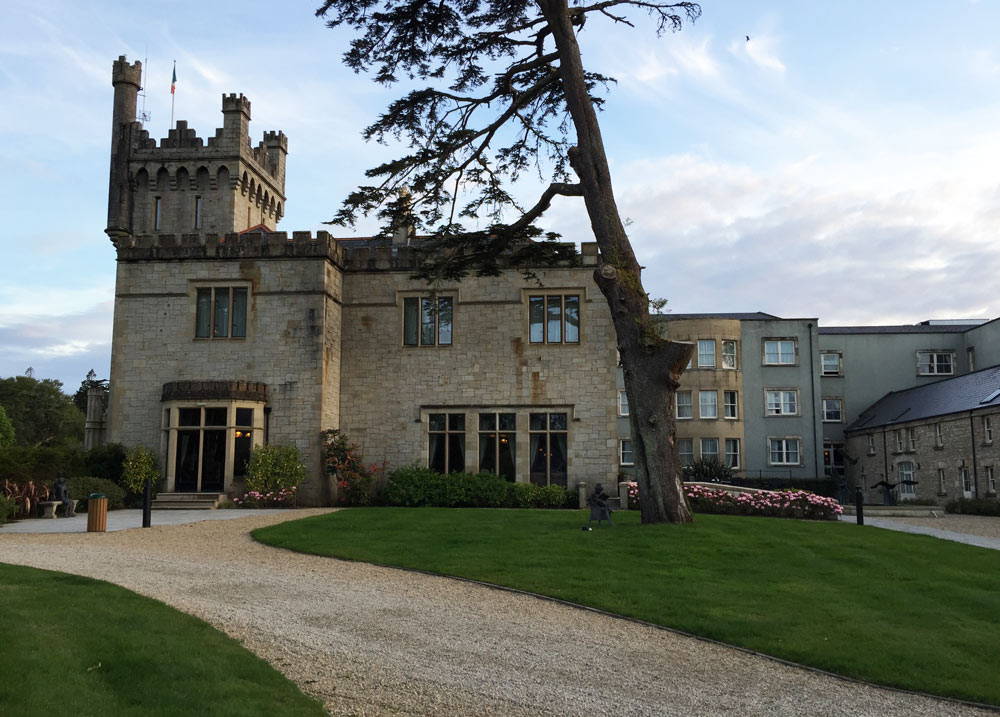 And while our experiences mixing with the wonderful Irish was great, these were usually evening events. Whether enjoying crowded pubs with wonderful live music playing with regular patrons occasionally joining the band on stage to “sit in” for a song or sharing seemingly impromptu poetry or literature readings, the Irish love to share - their beer, their talent and their opinions! One evening we were served our beer in some very cool glasses. Alison asked our server if they sold the glasses, but alas the answer was no. At the end of the evening however our server popped by the table with 2 glasses, with his compliments - and in an unexpected bonus, he had wrapped them in a bar cloth of authentic and sought-after Irish linen! 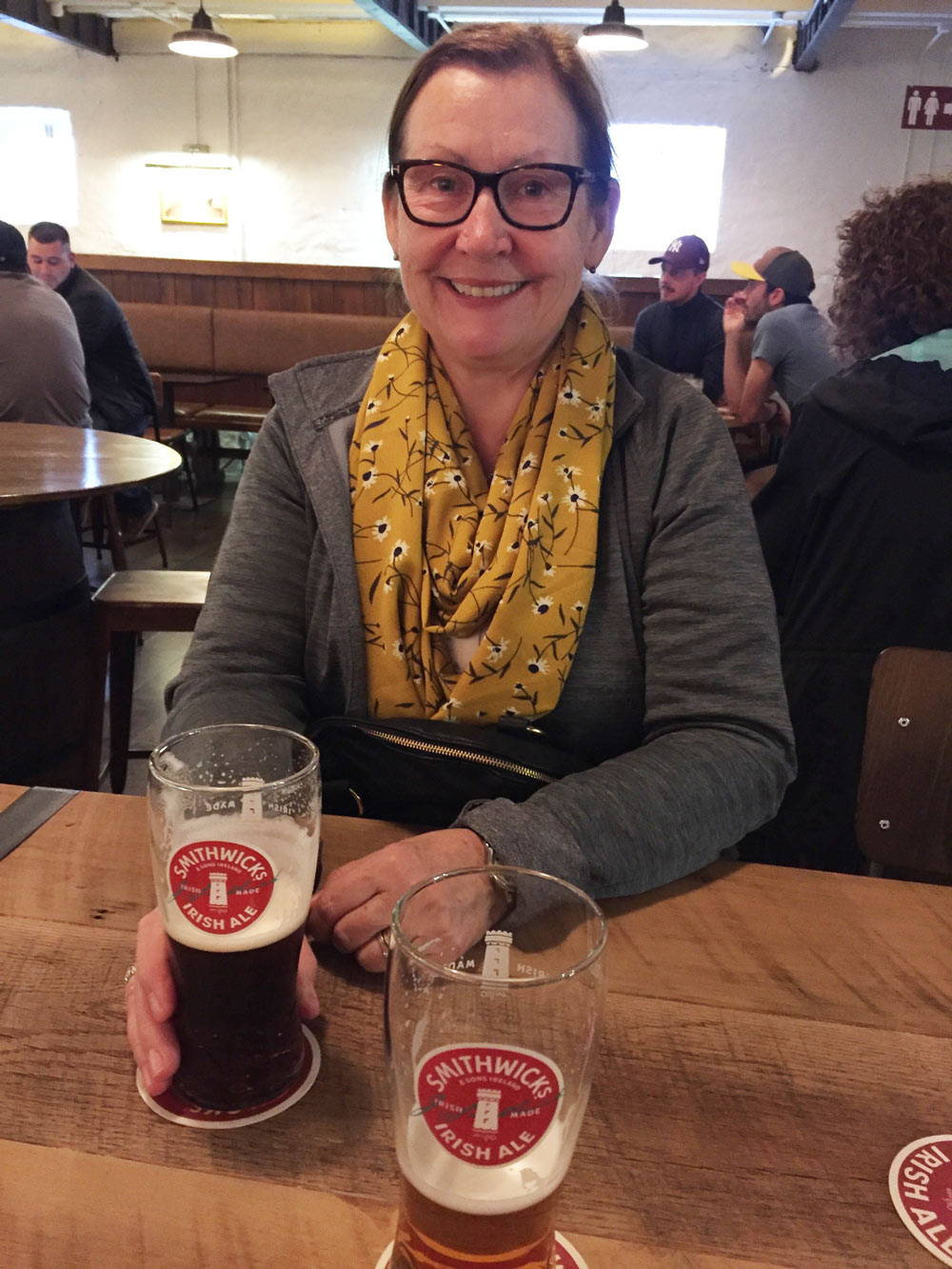 The people, the music, and the beauty - these three things will remain with Alison and I forever when we think of our circumnavigation of Ireland. Oh and the beer - did I mention the beer? And in the event you might be thinking that all we did was drink “Mother's Milk” aka Guinness in Irish pubs, we took a break one day and had a wonderful visit at the oldest distillery in the world - Bushmills Irish Whiskey in tiny Bushmills, Ireland. The tour was most interesting and, yes, they had a tasting room! And that’s what constitutes a break from beer in Ireland. Would we recommend a trip to Ireland? Only if we can come along! We’d go again in a heartbeat. 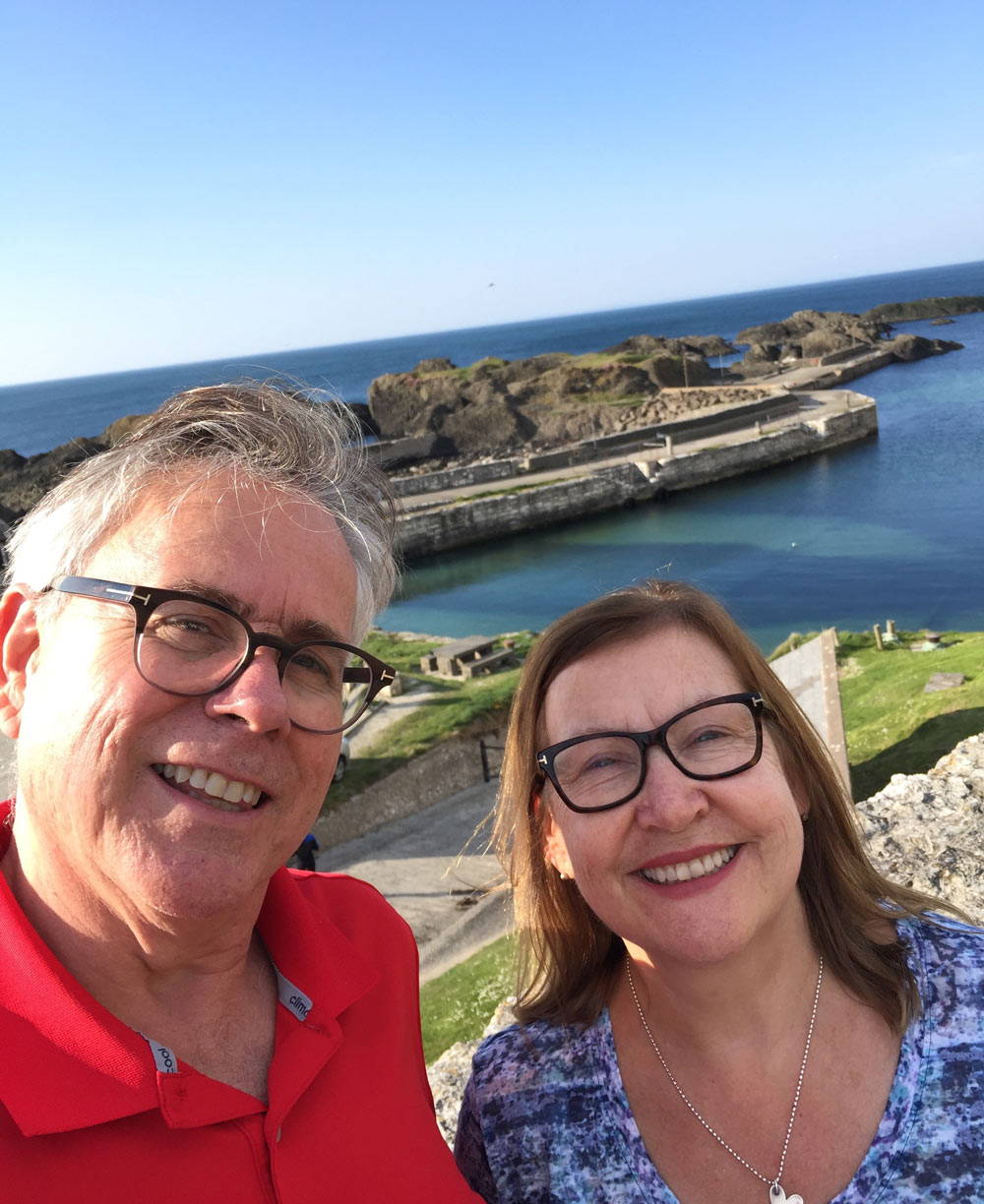